Lawrence Katkow, DDS, MAGD, received his dental degree from the Univ. of Maryland in 1998, and completed a postgraduate residency program in Advanced General Dentistry in 1999.  Dr. Katkow earned his Fellowship in the Academy of General Dentistry in 2008, and became a Master in July 2017.  He has been inducted into the Pierre Fouchard Academy (a Dental Honor Society,) and the International College of Dentists.  He earned a B.A. in Environmental Sciences from the University of Virginia in 1994. Dr. Larry met his wife, Andrea, in 1993 during an environmental studies class in Hawaii. Dr. Larry is active in the Maryland State Dental Association, and was awarded the 2004 New Dentist Leadership Award.  He has served as president (in 2006-2007) and treasurer, and on the membership committee and executive board of the Howard County Dental Association. He currently co-chairs the MD AGD mastership track continuing education program, and the Howard County Dental Association CE committee.  He is the current president of the Maryland Academy of General Dentistry.  Dr. Larry is also a member of the American Dental Association and is a senior clinical consultant for The Dental Advisor. Dr. Larry plays tennis regularly, and enjoys canoeing, camping, and many other sports.  One of Dr. Katkow’s recent honors was being named in the June 2016 issue of Baltimore Magazine as a Top Dentist, based on surveys sent to dentists and specialists.

I’m an MAGD dentist! What does that mean for you and your family?

MAGD stands for Master of the Academy of General Dentistry. Earning Mastership takes dedication to dental continuing education (CE) beyond graduation. Only about 2 percent of general dentists in the U.S. and Canada are AGD Masters. When you see a dentist with MAGD after their name, you can rest assured that they care about knowing the latest techniques and best practices in dentistry. AGD Masters practice these techniques in a classroom setting multiple times a year — not every dentist does this.

To become an AGD Master, a dentist must: 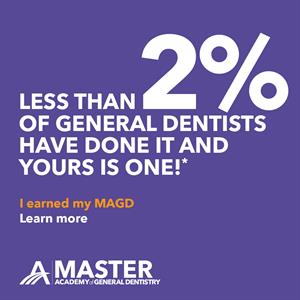